Artificial Intelligence – The Future is Upon Us 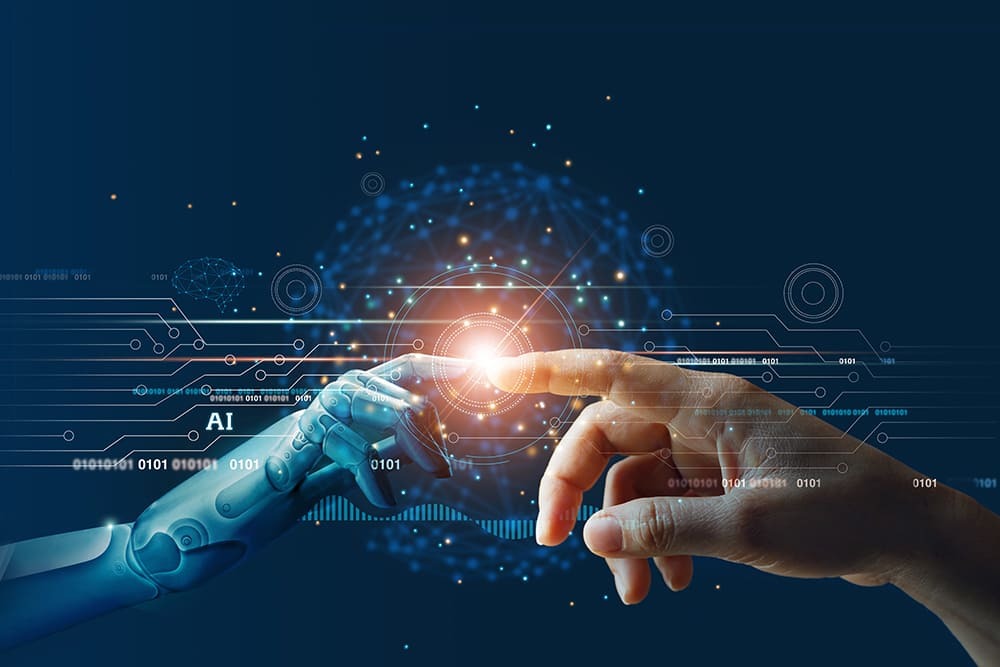 1983 was a big year for technology. The ARPANET officially changed to use the Internet Protocol, thus creating the Internet, Motorola introduced the first mobile phone to the public, the software Multi-Tool Word (soon to become Microsoft Word) is released, and arguably the most exciting of all, Swatch watches hit the market. That was a lot of new tech for the average person to take in at that time. Then the very next year, Hollywood gave us The Terminator and consumers’ minds were sent reeling with thoughts of what the future of technology, robots and artificial intelligence would bring.  How far away was our real-life Skynet?  Would we see it in our lifetime and what would it look like?

Today, Artificial Intelligence (AI) is now a part of everyday life.  If you have an Alexa device, have used a chatbot to ask customer service a question, or have ever wondered why you see so many product advertisements that seem to be made just for you, you’ve come across artificial intelligence.  In fact, even if you don’t have smart products in your home or office, there is a very high chance that you’ve interacted with AI since it has become so prevalent in many industries as of recent years.  And this trend is only expected to continue. In fact, according to the Brookings Institution, in just over a decade, AI will outperform humans in a variety of tasks, from writing essays to retail work and more. The future of AI will feature a shift in traditionally human-driven tasks to work performed by computers.  And this will most definitely lead to a change in how most businesses are operated.

The U.S. Bureau of Labor Statistics (BLS) expects the field of computer and information research to grow by about 19% between 2016 and 2026, due in part to the growing need for computer professionals who work with artificial intelligence technology. In the coming years, these professionals will be able to use AI to potentially solve a variety of human problems including humanitarian crises, healthcare needs, and quality control in areas such as product development and manufacturing.

The predicted impact of artificial intelligence on people, business, and industry in coming years is sure to be profound.  While some may worry about the dangers of over-automation, there are actually many positive social and economic benefits to AI. In order to understand those benefits, we must first understand the basics of artificial intelligence, from how it started to its most current applications.

At one time in the not-so-distant past, the rules of robotics were nothing more than a realm of science fiction. The first set of laws for robots was devised by science fiction author Isaac Asimov and were introduced in his 1942 short story "Runaround.” Now, the Rules of Robotics are being used by manufacturers to design software for everything from basic robotics tasks to developing artificial intelligence. Governments are starting to formulate rules and regulations on the development and use of robotics and AI. Below are the original Rules of Robotics

The original laws have been altered and elaborated on by Asimov and other authors. Asimov himself made slight modifications to the first three in various books and short stories to further develop how robots would interact with humans and each other. In later fiction where robots had taken responsibility for the government of whole planets and human civilizations, Asimov also added a fourth, or zeroth law, to precede the others: Zeroth Law - A robot may not harm humanity, or, by inaction, allow humanity to come to harm.

For most of us who are not involved with robotics or AI, these rules seem to make sense. But these first laws of robotics originated from science fiction and have been debunked by scientists. Since the original rules were introduced, three more categories have been added: software design, building intelligence and governing perspective.  In 2016, Satya Nadella, the CEO of Microsoft Corporation, offered the following Rules of Robotics - Software Design:

Since Robots are quickly moving beyond basic repetitive tasks to actually being empowered with intelligence, Google Brain - Google’s deep learning AI division - lays out design rules for robots to be able to be intelligent and learn for themselves without unintended consequences. Below are Google Brain’s Rules of Robotics – Building Intelligence:

And of course, there is the inevitable rules of governing that will play a part, known as the Rules of Robotics – Government Perspective. Very briefly and fairly self-explanatory, those rules are:

Now that we have laid out the basic history and workings of Artificial Intelligence, let’s take a look at how AI will affect the future of how businesses are operated.

Contrary to popular belief, personalized customer experiences are possible with the assistance of artificial intelligence. The use of AI is much more efficient for analyzing vast amounts of data and identifying patterns in the information- such as past purchase history, behavior patterns, credit scores, etc.  More efficient sales processes can be achieved by automating tedious tasks, such as scoring leads and adding them to CRMs.  AI can lend a hand in advertising and marketing as well by analyzing online data and providing businesses with ideas on how to boost traffic to websites and stores. The bottom line here is that these automated processes will allow business owners and their staff to focus on more important customer service duties while forgetting the less important tasks. There will always be a need for people in the workforce, but their roles may shift as technology becomes more advanced.

Along with all of the benefits of using AI, entrepreneurs need to remember to be responsible in using it in a way that will guarantee that technology works for them rather than against them.  There are new and important innovations coming out every day as Artificial Intelligence is becoming an integral part of how businesses operate.

If we learned anything from 1983 and The Terminator, it’s that the future is coming quickly, and artificial intelligence will certainly be a part of it.